In 1990, Yogesh Mehta was a failed entrepreneur living in Dubai, looking after his one-year-old son while his wife supported the family as a teacher. Mehta’s chemical distribution business had gone bankrupt back in his native India—leaving him desperate for a new start. 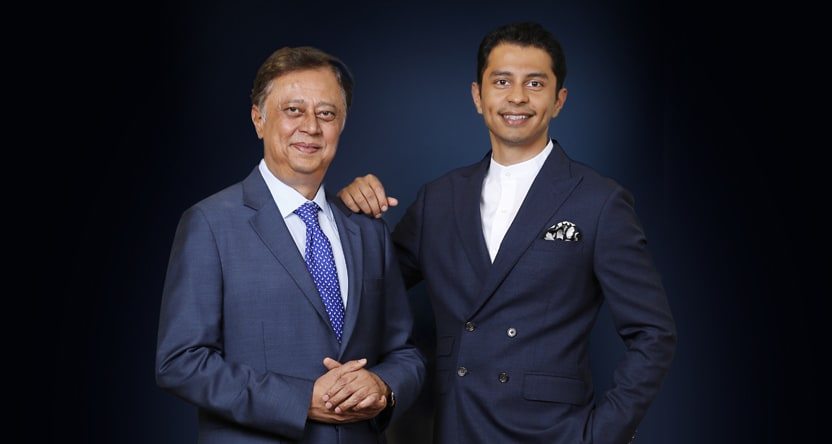 He found one in Dubai. Today, Mehta leads Petrochem, a billion-dollar firm ranked as the largest chemical distribution company in the Middle East in recent years by market intelligence firm ICIS. It also earned Mehta the number 24 spot on Forbes Middle East’s Top 100 Indian Business Leaders In The Arab World.

Petrochem operates a sprawling storage terminal at Dubai’s Jebel Ali port, from which it exports over 3 million metric tons of chemical products annually to customers in 27 countries, with its main markets in the Gulf, India and Africa. Mehta’s firm has distribution rights for a variety of chemical products from the likes of Shell, Eastman and LyondellBasell, which it in turn sells to companies primarily in the painting, coating, printing and packaging industries, as well as firms in the oil and gas sector. “There’s no paint company in the Middle East that will not buy from us,” says Mehta.

Fittingly, one of Mehta’s daily responsibilities is still keeping a close eye on his only child, Rohan, who joined Petrochem a little more than three years ago. Mehta is grooming his 29 year-old son to one day run the business. To that end, Mehta bought out his long time British partner and Petrochem co-founder David Lubbock in late 2017, acquiring full ownership of the company. Lubbock’s children weren’t interested in joining the business, says Mehta, while his son was, leading to the deal.

Rohan serves as Petrochem’s director of business development, making him the company’s third most powerful figure after his father and longtime Group Commercial Director Venu Nayar. Still, at age 58 Mehta doesn’t plan on stepping back for at least another decade, although he concedes his role will change.

There are other changes at work inside Petrochem too. Low oil prices have impacted the global chemicals industry over the past four years, leading to oversupply and falling margins. “Petrochemical distributors need to contend with razor thin margins and hence become more creative in choosing the best markets to sell to,” says Muhamad Fadhil, who oversees Middle East Markets for ICIS.

And, increasingly, distributors such as Petrochem face increasing competition from China, Russia and Turkey. “Petrochemical producers in the region also prefer to sell directly to end-users, bypassing traders and distributors in the process,” says Fadhil.

In the region, Petrochem competes against a number of players, such as Saudi Arabia-based Reda Chemicals, Lebanon’s Orkila Group and U.A.E.-based House of Chemicals Middle East. “Competition increased, and we were too many suppliers chasing very few buyers,” says Mehta. That ultimately derailed Petrochem’s plans for an IPO.

In 2016, with challenging market conditions showing no sign of abating, Mehta changed the way Petrochem does business. Historically, the company bought a wide-variety of chemicals in large quantities, as it made shipping more economical. But sitting on huge inventories as prices dropped was hurting the company, so Mehta began shedding less popular products from its portfolio, including plasticizers, powder chemicals and certain ketones. Petrochem now concentrates on its top 15 most popular products—with best sellers being aromatics, glycols and alcohols. “We stopped being everything for everybody,” says Mehta.

The firm also became more careful with receivables. It bills its customers monthly now, instead of every three months, making it easier to navigate volatile price fluctuations. “We were buying every month, so we were going to sell this every month,” says Mehta.

The changes appear to be working. Last year was Petrochem’s best year since 2010, says Mehta, with the company recording revenues of $1.1 billion, up 17% from 2016. The company is profitable, according to Mehta, although he declines to reveal profits.

This year, Mehta is eying a move into manufacturing chemicals in the U.A.E., rather than just distributing them. “Saudi Arabia has become a hotbed for raw materials that are suitable for manufacturing chemicals,” says Mehta. Previously, he avoided getting into manufacturing because raw materials had to be sourced from China, Europe or the U.S., making the process more expensive. He also hopes to establish a distribution terminal in Saudi Arabia in September of this year—which would be his third after Dubai and Egypt.

The Mehta family has long been involved in the chemical business. Mehta was born and raised in Mumbai, where his father ran a chemicals manufacturing business. Due to differences he had with his father, Mehta self-funded the establishment of his own chemicals trading company at 18, instead of joining the family business. Yet, he never made much money, with a lack of discipline and inexperience costing the young entrepreneur dearly. While running the business, he also earned a BSC in chemistry. After ten years of scraping buy, Mehta’s company went under.

Looking to start over, he came to Dubai in 1990. He had a friend living there, who offered him a room in his apartment while he looked for an opportunity. “I didn’t want to be employed. I wanted to find a financial partner,” says Mehta.
He researched the chemicals market at a local library, making a list of importers and exporters, and noting the volume of chemicals sold in the U.A.E. Dubai’s economy was still developing, and he saw gaps in the market. His research coalesced into a business plan.

Meanwhile, his wife supported the family as a teacher. The arrangement didn’t last long. Mehta started working part-time for his wife’s brother, who was a foodstuff indentor in Dubai. Mehta would accompany his brother-in-law on sales visits, with one stop being at a food distribution company called MH Enterprises, which was owned by a man named H.C. Gandhi. The Indian businessman took an interest in Mehta, and asked to see his business plan.

Mehta explained how he was looking for a partner to invest in his new chemical distribution company in return for a 50% stake. Gandhi was interested in Mehta’s plan, and offered to partner. But instead of the terms Mehta proposed, the businessman offered him a 30% stake, along with a AED 2,000 per month salary, in return for his investment. Mehta jumped at the offer. “I would have accepted any money, as long as I got a break,” he says.

In June of 1990, they established a small chemical distribution company. Two months later, the Gulf War broke out, sending a chill through the region. Unsettled by the conflict, many expats left the city, remembers Mehta. Gandhi wasn’t fazed, and gave his new business partner a bit of sage advice—he recommended that Mehta order chemicals in even greater quantities. Due to the conflict, competitors had stopped importing, but Gandhi felt the war wouldn’t last long and that demand would rebound.

So, Mehta ordered more chemicals. “The war that started in August finished in January, about when our products started coming in,” says Mehta. “People lose money in war, while others make fortunes.” The move established the company as a reliable local source for chemicals and the partners turned handsome profits.

Not long after, Mehta had another chance meeting that changed his fortunes. In 1991, David Lubbock, who owned U.K-based firm Petrochem Carless, came to Dubai on a fishing trip. During his stay, Lubbock went through the local yellow pages and found an ad placed by Mehta. He dropped by his office, and Mehta immediately placed an order to buy from him. Lubbock became one of his main suppliers.

The pair became friends, and Mehta remembers Lubbock offering to partner with him if he ever wanted to build a larger business. Mehta initially declined, saying he felt indebted to Gandhi. Soon though, his ambitions grew.
Dubai was prospering, and Mehta saw an opportunity to expand regionally if he moved quickly. He wanted to build a storage terminal, but needed further investment. “Oil prices were $120 at the time,” says Mehta. “Business was always going to be good in the chemical industry.”

Gandhi, who was much older than Mehta, wasn’t sold on the idea and was considering retirement. They agreed to part ways, and in 1995 Mehta and Lubbock formed Petrochem Middle East as a joint venture.

Mehta worked to acquire agencies from chemical producers, which were then relatively easy to get in the region. “Many people didn’t know where Dubai was,” says Mehta. “They mistook it for Saudi Arabia.”

Still, ordering larger quantities and wider varieties of chemicals from suppliers required significant upfront costs—in the millions of dollars—and he initially struggled to get bank finance. Petrochem instead depended on supplier’s credit during its first year, which didn’t always result in the best terms. “As we performed and paid on time, more and more credit was available,” says Mehta.

The company never relied on local purchase of chemicals, as it was more expensive. Instead it imported and stocked products from China, Korea, Europe and the U.S. In those days Mehta constantly traveled, spending nearly half the year visiting suppliers and potential customers, trying to build relationships.

In 1996, Petrochem began work on its distribution terminal. It leased land in Jebel Ali, and built the facility in four stages, completing development in 2002. The terminal included bulk storage tanks, blending facilities, a dry goods storage area and an in-house logistics and operations center, among other things.

The terminal helped cement the company’s position in the region, and in Mehta’s reckoning, served as a significant deterrent for competitors looking to enter the market. Petrochem’s earliest customers were mostly from the paint industry, but as the company grew it became a wholesaler too, selling products to smaller distributors.

By 2002, Petrochem was one of the largest chemical distributors in the Middle East. It expanded overseas, opening offices in Mumbai, Singapore, London and Antwerp, among others, while building another storage facility in Egypt’s Adabiya Port.

Mehta began planning an IPO. “Those were the magical days,” he says. “You live in a growing economy, in a growing region, how can you go wrong?”

Those days of easy growth are now gone, but Mehta insists he’s adapting. He sees further industry changes ahead, brought about by innovations such as e-commerce, as well as the threat of new players. “The competition that we as Petrochem are going to face, say five years from now, is not even born yet,” says Mehta.

That’s where his son Rohan comes in. He joined him after graduating from Northeastern University in the U.S. with a degree in economics and entrepreneurship and working at a chemical refinery in Texas for two years. “He’s the successor. He’s the young prince,” says Mehta.